Imagine this: You are about to leave work and tap your phone to the sticker on your desk, and your wife gets a message that you will be home in 20 minutes. You go out for a drink at your favorite local bar, tap your phone against a sticker at the door, and that night's wine specials appear on your phone's display. In the Near Field Communications (NFC) - enabled world of tomorrow, these kinds of automated, helpful functions are just a tap away.

NFC is a short range (4 centimeters to 10 centimeters) wireless RFID technology that uses interactive electromagnetic radio fields over the conventional direct radio transmissions that other wireless technology like Bluetooth, access. Intuitive and versatile, NFC technology only requires a simple touch. There is no requirement for line of sight. With a potential of applicability covering the length and breadth of most commercial industries, NFC complements other wireless technologies such as Wi-Fi and Bluetooth.

NFC is designed to operate with current contactless card technologies and is powered by built-in capabilities to aid secure applications. NFC renders communication methodologies to non self-powered devices, like stickers etc., NFC's short connectivity range avoids the security risks imposed by Bluetooth and other wireless devices that provide access without password protection. The future of NFC is open to a plethora of opportunities beyond the scope of the typical mobile use cases found in today's market.

What began as possibilities in mobile payments and digital wallets will eventually extend to interactive toys, smart doors and other automated activities that simplify life and were previously considered utopian.

Recent research from Berg Insight focuses on the sale and shipment of NFC-enabled devices. Global sales of these reached 30 million units in 2011, 10 times the sell-in of NFC devices in 2010. The firm predicts an even larger surge of NFC devices in 2016 with a forecast of 700 million constantly growing at a CAGR of 87.8 percent.

It is important to note that NFC-enabled receiver equipment at retail stores are falling far short of the mobile devices equipped with this technology. Berg Insight estimates less than 10 percent of retail stores use NFC technology as part of their interaction with consumers. But expectations are high that the retail market will make up for bridging the gap once the full potential of NFC is commercialized.

About one in every four smartphones is expected to be NFC-enabled by the year 2014. In 2011, OEMs delivered more than 40 NFC-enabled handsets globally and more than 100 new NFC-enabled models have been announced so far in 2012. In addition, Microsoft has confirmed that Windows Phones 8 will use NFC.

ISIS a consortium of Verizon, AT&T and T-Mobile, is running a few pilot programs and is expected to be ready sometime soon with the ISIS Mobile Wallet. This is proposed to support debit and credit cards from MasterCard, Visa, American Express as well as Discover. Google, since its September 2011 release of Google Wallet has arrived with a cloud version of the tool that is already made available on six phones from Virgin Mobile and Sprint, plus the Nexus 7 tablet. Affiliated with MasterCard PayPass, users today can pay with their phones at more than 200,000 retail locations across the US.. Google Wallet, today, supports most types of credit cards following the recent announcement by Google.

NFC is a technology that was first offered by NXP (formerly Philips Semiconductors) and Sony. Standardized under ISO/IEC 18092 and ECMA-340, the technology is compatible with most major contactless standards. Of these contactless standards, the most commonly and widely adopted ones include FeliCa from the house of Sony and MIFARE from NXP. NFC is compatible with both of these ID infrastructures.

NFC devices possess the ability to operate at 13.56 MHz and data transfer capability lies at a maximum bit rate of 424kbps. The communication between two NFC-enabled devices is carried out with a mere touch or proximity wave of the two devices against or near each other. For example, a NFC-enabled mobile device user can complete a purchase by simply touching their device to a NFC credit card reader.

NFC does not limit the number of resources or units that can be connected to this technology. Multiple devices in a specific area can communicate with each other utilizing the same frequency. There is no need for specific software, no piggy-backing off others' NFC signals, and neither does the technology require a search and device pairing procedure.

Card Emulation Mode: The greatest advantage of NFC card emulation mode is that it can substitute for a standard credit card or key fob. This allows NFC-enabled units and devices to complement existing contactless card infrastructure in a wide variety of applications including payments, access control and ticketing.

Peer-to-Peer Mode: This mode is best used between two NFC-enabled devices. Large data transfers can slow down the speeds of NFC. But peer-to-peer interaction can be utilized to create a secondary high speed handover such as Wi-Fi or Bluetooth.

Reader/Writer Mode: Devices that are NFC-enabled have the ability to read and write to NFC and other contactless cards. For example, where a NFC tag is attached to a map or coupon, the NFC smartphone can simply tap the tag for accessing information contained in the tag in a very convenient and easy manner.

Active Mode: When two devices (initiator and target) are involved in the process of communication, each of them generates an electromagnetic field. Data roadblocks are avoided because the target device switches off when the initiator communicates and switches to listening mode. The same process occurs vice versa but the two can change their states when required. For example, two NFC-enabled devices can communicate with each other and transfer data.

Passive Mode: Quite contrary to the active mode, there is only one device that starts and continues communication, while the other device receives the energy but does not initiate one of its own. For example, a NFC mobile phone can be paired with a RFID-tagged movie poster. 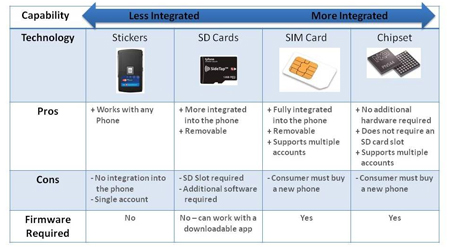 Multiple Ways of Integrating NFC with the Device:

NFC as a tool for your mobile device incorporates and permits the usage of any of these four technologies: Stickers, SD cards, SIM card and chipsets. While stickers and SD cards are less integrated with the device, the latter two are relatively more integrated with it.

Use Cases: Mobile Payments and Beyond:

Effectively pair with a tap - just tap an NFC-enabled mobile phone on an NFC embedded digital printer to obtain a quick print of the favorite picture that is stored in the mobile phone. Similarly, users can unlock their car, home or office with a simple tap.

A Day in the Life of a NFC Mobile Phone User

Use an NFC-enabled mobile phone at the airport or rail station to pay fare or to obtain information at kiosk. Use it in the car to personalize seat position, or use it as a driver's license. At the office, use it to exchange business cards and for entry and exit to the building.

NFC Posters: NFC tags can be applied to physical posters and also appended to brochures, business cards and other tangible materials.

NFC Tags can be applied to magazines and posters and can support URLs, application downloads and contact details as well. NFC Business Cards have immediate benefit to the corporate and business world across industries, because NFC can store Web addresses and contact information.

There are understandable concerns about the security of NFC technology. Below are three potential issues that NFC adopters must address.

Eavesdropping: Theoretically, when a third party intercepts a data transmission between a credit card reader and a smartphone, credit card information becomes accessible and so is there a possible leak of personal information.

Data Corruption or Manipulation: Information that is received by the receiving party could be fabricated or erroneous. There may or may not be an intention of information theft. But the data interceptor can prevent receipt of original information.

Virus: Although smartphone viruses are rare, they seem to steadily grow and are expected to increase with higher usage. However, they are not of great financial gain for hackers and may not be subjected to distress. However, hackers may have the intention of gaining access to credit card information stored in smartphones. The first of such viruses was observed in October 2010.

The future of NFC holds more interesting and luxurious possibilities. For instance, summon the waiter or waitress at a restaurant by just tapping your phone or even place your order.

Check into a hotel and enter your room directly without accessing the counter or reception. Your NFC enabled phone can unlock your room's door and make life easier for you. Use your phone to enter office buildings, car parking and clocking in/ out at work. You can even start your motorcycle with your phone or card.

Interactive gaming is an area that creatively incorporates NFC to accelerate the level of gaming. Skylanders game became NFC powered in late 2011 where their real life figurines were embedded with NFC chips. Small and big things like these and more will put NFC in the pinnacle of the technology roadmap.

With NFC gaining a lot of traction in the industry today – tap to unlock is close to everyday reality.

Asokan Ashok serves as the Director of Content & Services at Samsung Media Solution America. Check out his personal web site at
www.asokaninc.com